Discussion on LUFC and absolutely anything... welcome to the Dark Side
Post Reply
666 posts

Syd Brenner died last week and I only just realised. Bit of a giant.
You know, I'm sick of following my dreams, man. I'm just going to ask where they're going and hook up with 'em later.
Top

Excellent player. Of his time, a real leader.
Top

Yup he belonged to a bygone age before the corporatisation of football and its multi-millionaires. He earned a fraction of what today's premiership players get and he famously played with painkilling injections taken before matches. I think he got bad arthritis and was the subject of a social security witchhunt - can't remember but he lost disability payments or something .I remember talking to John Mclelland about 15 years ago. He was working as a postman and told me that he was earning £1200 a week at his heyday under Wilkinson.Unbelievable compared to the shit that goes on now.
For every step,the footprint was already there.
Top

Smith was famously chased by social security after he took a penalty in a legends shoot out, he was loaded up on painkillers so that he could walk on to the pitch without the crutches he normally used.
The DSS then stopped his benefits and he spent a long time getting them restored.
Top

Saw some pretty nasty stuff on Twitter about Tommy Smith yesterday. Essentially he was a big racist bastard. So there’s that.
Keep Fighting
@lufchris - contributes to your daily bullshit quota in easy 140 charactor installments
Top

MightyWhite wrote:Saw some pretty nasty stuff on Twitter about Tommy Smith yesterday. Essentially he was a big racist bastard. So there’s that.

A racist footballer of the 60s?
There's a shocker.
Mirrors and copulation are abominable, since they both multiply the numbers of men.
Top

Some other site wrote:Hard man Tommy Smith had two pet hates in football: Leeds United's Allan Clarke and his own skipper at Liverpool, Emlyn Hughes. And not necessarily in that order. When Hughes clashed with Clarke in a goalmouth melee and old squeaky voice Emlyn found himself on the deck with blood pouring from his nose, Smithy showed himself in his true colours. "Maybe that Clarke's not such a bad bloke after all," muttered Tom the compassionate.

MightyWhite wrote:Saw some pretty nasty stuff on Twitter about Tommy Smith yesterday. Essentially he was a big racist bastard. So there’s that.

A racist footballer of the 60s?
There's a shocker.

Ah, but there’s racist and there’s 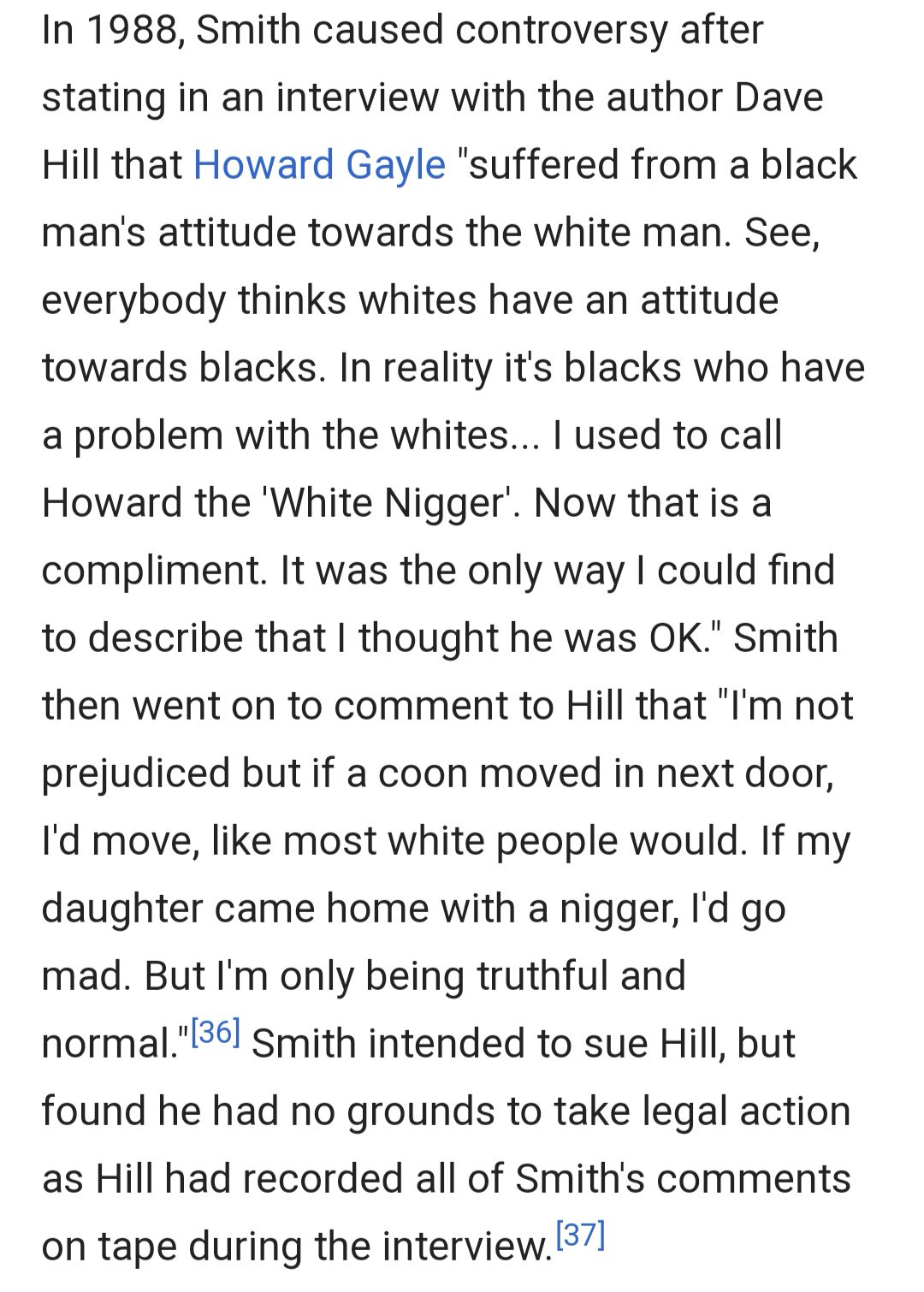 Billy McNeil has departed.
Leeds United - I love you more than I want to.

Proud to be Leeds wrote:Billy McNeil has departed.

points for me too, provided that the pair of us can both be forgiven for omitting the second 'L' in his surname

Did he not manage Villa & Man City in the same season and they were both relegated?
Top

rss1969 wrote:Did he not manage Villa & Man City in the same season and they were both relegated?

no idea. the thing i always remember about him is that he, maybe even as much as much as fergie, is the coach who really established aberdeen as a dominant force... fergie only got the #1s job because celtic, who'd just finished 8th or something ridiculous, poached mcneil, in mcneil's last aberdeen season they'd run rangers really close in both the league & cup, & ferguson didn't sign or even bring through any of the 'hall of famers' like WGS, willie miller, & so on.
Top

Mirrors and copulation are abominable, since they both multiply the numbers of men.
Top
Post Reply
666 posts